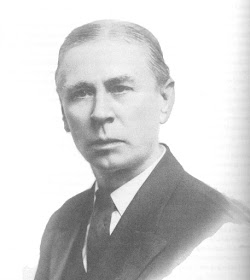 The theologian, even when he held no other office in the Church, was to be a practical man of affairs, not merely a theological savant and learned theorizer; and the administrator of the externals of the Synod's work with its ramifying interests and the determining of its policies in given instances, even when that was his sole occupation, was nevertheless to be a man fully trained in the Scriptures and the confessions of the Church and capable of discerning false and questionable trends in doctrine and practise and of maintaining his ground over against them. Such was - and, I trust, still is - the sound persuasion of the entire ministerium of the Missouri Synod, of the teachers in its congregational and synodical schools, and of its well-informed laymen...

...In their definition of theology the great teachers of the Missouri Synod, without a single exception, for nearly a century, have harked back to the old Lutheran view, viz., that theology is the "practical, God-given aptitude" (habitus practicus theodotos) of believingly accepting, expounding, and applying Holy Scripture for the creation, clarification, invigoration, and preservation of genuine Christian faith in the individual believer and for the upbuilding jointly in truth and love of the entire body of believers, the one holy Christian Church, the communion of saints.


Also in regards to this point, Dau shares a saying that Walther and Pieper liked to quote.

I have heard both Walther and Pieper cite with relish Rudelbach's dictum (quoted from memory): "Praktisch ist die Theologie durch und durch, praktisch in ihrem Anfang, Mittel und Bezuegen." (Theology is practical through and through, practical as regards its origin, means, and relationships.)


On a related topic, Dau writes about how the Missourians have been habitually denounced by German and some American theologians as "Wissenschaftsveraechter (contemners of science)" because of their involvement with large amounts of practical church work--especially in view of the large need during the formation and beginnings of the Synod. "But," Dau points, "this does not explain adequately the Missourian aversion to mere theological learning for learning's sake. One reason for this aversion has been stated at the head of this article in Dr. Pieper's own words. True Christianity, in the belief of Missourians, represents a life, not a system of creedal formulas or a compend of religious teaching." Dau goes on to eloquently state:

Even orthodoxy, which Missourians have always valued as the only permissible form of teaching in the Church, is regarded as worthless, yea, as the more damnatory to the possessor, if it is not lived. There is no room in the Missouri Synod for dead orthodoxy, though she is again and again charged with it. Faith is viewed by Missourians as that lively, energetic, ever-active and productive thing in men as which Luther characterized it in his Introduction to Romans.

Dau goes on to highlight Pieper's most important writings, especially his Dogmatics, and the work of the Synod during his leadership. Dau also perfectly describes the academic, scientific theologian, that so many "modern" theologians, then and now!, desire to be.

...[the] professional theologian who is content with ransacking libraries in research work to establish an abstruse thesis or who sits in his study philosophizing on religious relativities, spinning religious theories from his reflecting mind, starting new "trends" of theological thought, and building up a new "school" in theology, is a wearisome object of contemplation. He exemplifies...that labored futility of "ever learning and never being able to come to the knowledge of the truth" against which Paul warned Timothy, 2 Tim. 3,7. When such men speak in terms of depreciation, and even disgust, about ''learning,'' they do not despise the acquisition of real knowledge, a liberal education, or special training, but only that inane quality of "the bookful blockhead, ignorantly read, with loads of learned lumber in his head," that "noisy jargon of the schools, and idle nonsense of laborious fools who fetter reason with perplexing rules," which has been satirized ad nauseam in the world's literature.


Dau continues with a very interesting discussion oncerning in what ways may and may not theology be considered a science. In part he writes,

Theology is not a science in the strict sense of the term. Some Lutheran theologians have classified theology as a science; but whenever this was done by a gnesio-Lutheran teacher, the term "science" was used in a wide sense. Science is derived from scire, to know. Inasmuch as theology operates with the revelation of God, or with what God wants men to know, it deserves to be called science. In that sense anything else that men know, even most trivial facts, could be called science. But when science is defined as the sum total of facts which the human mind has discovered by research and established by correct reasoning, it is plain that theology does not belong in the same category with philosophy, jurisprudence, and medicine, which have created systems of thought and methods of ratiocination in certain domains of human knowledge. Theology is absolutely sui generis, in a class by itself, because, in the first place, it does not create its facts by processes of thinking and drawing conclusions from discovered facts, but receives them on the authority of God in the Holy Scriptures...Trouble for the Church, most serious trouble, arose when the old triga acaclemica of the pure sciences was increased to a quadriga by hitching theology as the fourth horse to the academic chariot and making it run a race with philosophy and the other sciences under the whip of the charioteer, Magister Reason, Ph. D., LL. D., M. D., and now also D. D.


Dau ends his tribute with a note of thankfulness toward the service Pieper performed, particularly  by attacking the rationalism of his day, and his labor as a whole. He ends with a good question for all Missourians, in his day as well as ours:

How much we in the Missouri Synod really love Dr. Pieper will have to be shown in the years to come by the use we shall make of the literary heritage which he and his theological forebears have left us.


Need to Get Read Level: It is a brief, edifying essay in honor of this great churchman of the Missouri Synod--take a half hour and enjoy it. Missouri Synod pastors: 10/10; Confessional Lutheran pastors in general: 7/10; LCMS Laymen: 8/10