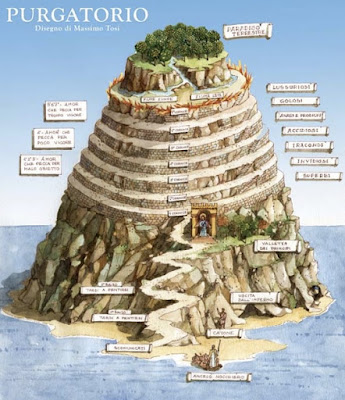 Do men need further sanctifying and purifying after death? What of an intermediate state: purgatory or something akin to it? Can men truly be perfectly purged of the sin still clinging to them in the instant of death?

In "The Protestant Purgatory," Part V of his series of essays on the "Hades Gospel," Prof. Th. Engelder considers the teaching of purgatory, or the state(s) of men who are dead preceding the resurrection. He rightly points out the return to the Roman teaching of purgatory by Protestants who argue for the Hades Gospel (a second chance for salvation after death) and who support some sort of intermediate state in the afterlife. Engelder:


"That is the Catholic purgatory. And what is the Protestant purgatory? The Hades theologians, particularly those who believe in salvation by faith alone, refuse to embody all the Romish features in their reconstructed purgatory. But they have taken over this feature: the dying Christian carries remnants of sin with him into the next world and must go through a purgatorial, purifying process in Hades before he enters heaven."

The connection between those who hold to the Hades Gospel and to an intermediate purgatorial state after death, and the connection to the similar conception of purgatory in Roman theology, is one and the same: the denial of justification by faith. The error is accomplished by mixing justification and sanctification, faith and works, and holding that we are declared righteousness, not for Christ's sake alone, but after/through/or in view of a progression towards holiness. Engelder:

"The doctrine of purgatory involves a fundamental error. It holds that Christ did not fully satisfy the justice of God. It denies the chief article of the Christian religion, that through faith we have full remission of the guilt and punishment of all sins. It denies the heart of the Gospel and strikes at the heart of Protestantism. Luther: "Purgatory is one great lie; it is throughout pure wickedness and is based on unbelief. For they deny that faith saves and hold that man must satisfy the justice of God in order to be saved." (I: 1462.) The Smalcald Articles: "Purgatory, and every solemnity, rite, and commerce connected with it, is to be regarded as nothing but a specter of the devil. For it conflicts with the chief article [which teaches] that only Christ, and not the works of men, are to help [set free] souls." (Triglotta, p.465.)"

This is the heart of Engelder's article, yet it is worthwhile seeing the evidence laid out before you. Among modern Lutherans, there have been proponents of this position: C.M. Jacobs; Bishop Martensen of Denmark; and Kahnis are some of the most prominent examples. Hengstenberg is even pointed out as a supporter of an intermediate purgatorial state. A very sad addition, though not totally unexpected, as Hengstenberg was also involved on the wrong side of a debate concerning progressive justification.

Another characteristic, besides human presuppositions, of the arguments for creating a Protestant purgatory is a tendency to pit the soul's immediate entrance into heaven or hell against the final judgment. It is as if speculative ponderings demand that there be a theology constructed concerning an intermediate state lest the final judgment be somehow rendered meaningless.

Lenski, in his Commentary, when dealing with the thief on the cross in Luke 23: "Here all the perversions about sheol and hades are brought in, plus even the descent into hades, confounding even confusion. Yet all this muddle furnishes no proof whatever for more than two places in the other world .... Also Jesus did not say: 'Today thou shalt be in purgatory.' Yet, if ever a sinner deserved a long term in purgatory, this malefactor was one. His immediate transfer into heaven is proof fatal to the idea of a purgatory or of any intermediate place." - We have shown in the preceding articles that in Scripture "paradise" and "Abraham's bosom" are synonymous with "heaven."

Stoeckhardt, in his Biblische Geschichte, p. 207 ff, concerning Lazarus and the rich man: "The beggar died and was carried by the angels into Abraham's bosom, that is, into paradise, the home of the blessed. . . . The end of the believers is eternal bliss, the fullness of joy in blissful communion with God and all the elect."

Kretzmann, in his Popular Commentary: "The beggar died. But his death provoked an embassy from heaven: he was carried up by the angels into the bosom of Abraham . . . was joyfully received into the eternal home and found a place of honor by the side of Abraham."

A wonderful quote from Hoenecke is provided as well(s): "'I have finished my course.' According to this statement of the Holy Ghost the Christian course, of which sanctification is an essential part, is finished at death; consequently the fight for holiness is ended with death. Sanctification is a battle, is labor. That, says Scripture, is followed by rest." (Ev.-Luth. Dogmatik, IV, p.234.)

Engelder directly meets the alleged problem of an instantaneous purgation at death:

What about this Moehler-Farrar-Kahnis dilemma that the Old Protestants must assume: either that sin-tainted men are received into the holy heavens or that the change wrought in them at death is a violent, unnatural, magical, mechanical act? Tertium datur! We Old Protestants certainly believe that our holiness in heaven will be a perfect holiness; we believe, too, that all remnants of sin will be removed from our soul at the moment of death, instantaneously; and we believe and know that in effecting this glorious change God is not breaking any psychological or any spiritual law. There is nothing in philosophy, nothing in sound reason, which would prevent God from performing miracles. And a miracle of grace takes place when God changes this wretched, imperfect soul into one formed perfectly in His image. A miraculous change need not be a magical change, whatever "magical" may mean. And' a miraculous change need not be a mechanical one. It is throughout spiritual. It does no violence to our spiritual nature when God, through His powers of grace, heals our sick soul with one gracious touch. The Christian soul does not complain that God is laying violent hands upon it. It is filled with heavenly joy over this wonderful change. God cannot perform the miracles of His grace instantaneously? In conversion an instantaneous change takes place, and the converted Christian does not complain of violence, coercion, mechanical processes, and the like. In conversion God draws the sinner gently, and the sinner hears a sweet and gracious voice. And when God bestows upon the believer in the hour of death, at the moment of his entrance into the Holy Place, perfect holiness, his deepest longings are satisfied. He had been crying out: "Oh, wretched man that I am! Who shall deliver me from the body of this death?" (Rom. 7:24). And now the miracle has been performed. It took but a moment. He closed his eyes in death and awoke in heaven! And "I shall be satisfied, when I awake, with thy likeness" (Ps. 17: 15).

Engelder also quotes Th. Traub: "Kliefoth asserts that 'no unnatural leaps (unnatuerliche Spruenge) occur where the all-wise God deals with man.' We refuse to subscribe to such a thought. If there are no 'unnatural leaps,' all of us are lost. Then there would be no Christ, no faith, no conversion, no absolution. For all of these things are 'unnatural leaps'; all of it takes place in the history of mankind and of the individual, not as the result of any kind of evolutionary development, but as divine miracles which change the natural life of mankind and the individual."

By way of a quotation from W.E. Orchard, Engelder ends his article noting the irony that the Lutheran Reformation began, in large part, in reaction to the doctrine and practices surrounding purgatory. For heirs of the Reformation to capitulate on this particular point can only mean that they are Rome-ward bound.


[As a side note: We should observe at this juncture that perhaps the charge of "romanizing" as was applied to various conservative European Lutherans by Missourians was not only because of squabbles over the ministry, but contained a much broader and comprehensive critique on their theology.]


[Here is a brief introduction to Engelder and his work.]


Below are all six of Engelder's essays, in order, linked to the online articles.

If you are a pastor who isn't comfortable speaking to this issue and the questions surrounding the life hereafter, then you probably need to, um, "supplement you knowledge" about basic Christianity. (Read: get it straight, fast. You should know this already!) There is a decent amount of German and other foreign language references in the article. However, the layman who is grounded in the Catechism and Scriptures and takes a plunge will indeed be rewarded with much good food for thought and reflection.
Posted by Pastor David Ramirez at 2:06 PM