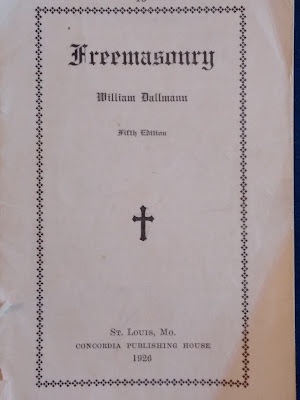 In the tract "Freemasonry," William Dallmann discusses the false teaching and anti-Christian nature of freemasonry. He doesn't get bogged down in broader theories about the masons but rather focuses on hanging their own words around them. This resulted in a brief, helpful summary of the problems and false doctrine of freemasonry.

The full tract is below.

Note: For another tract by Dallmann and a brief introduction to this new series, "Tracts of the old Missouri Synod," click here.
Read more »
Posted by Pastor David Ramirez at 1:11 PM No comments:

"Why I Am a 'Missourian'" by Rev. William Dallmann and an Introduction to Tracts of Old Missouri 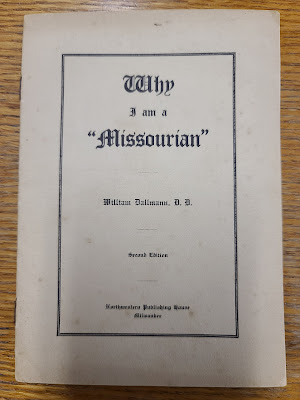 Tracts have always been a powerful form of popularly "getting the word out." During the Reformation, pamphleteers shaped the public's perception of innumerable topics. While perhaps memes have surpassed the paper tract or pamphlet today, they are still used and are of great use.
I have seen hundreds of Lutheran tracts and am fascinated by them. They help us see what our forefathers thought was essential to say about particular subjects to a popular audience. Summarization betrays much about how a person, or a Synod, thinks and thus I'd like to share some of the tracts of "Old Missouri."
Note: When posting tracts, I plan on keeping my commentary brief and posting the complete tract/s.
The first tract is "Why I Am a 'Missourian'" by William Dallmann.
Read more »
Posted by Pastor David Ramirez at 2:38 PM No comments:

President Pfotenhauer's Address to the 1917 Convention of The Evangelical Lutheran Synod of Missouri, Ohio, and Other States in Milwaukee 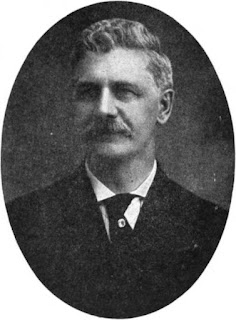 Rev. Johann Friedrich Pfotenhauer was the fifth president of the Missouri Synod and the last one who was born in Germany. He served as president from 1911-1935.

Below is his address to the 1917 Synodical Convention. The convention was held June 20-29 in Milwaukee. You can find the Proceedings of the 1917 Convention here. Pfotenhauer's address was given in German, but the English translation is given below.

Though given a little over a hundred years ago, the address is incredibly timely for our current situation--pestilence, wars and rumors of wars, the anniversary of the Reformation, the temptations of unionism and laxity.

Pfotenhauer understood the dangers surrounding the Synod and directed the Christian men who were at the convention to cling to the treasure of the Gospel which they had received from the mercies of Christ.

Alas, it cannot be denied that in some respects we are not as our fathers were, that there has been a let-up in confessional definiteness and earnestness, in the love to God’s Word, in indoctrination, in the thorough instruction of the youth in the Catechism, and in the life of godliness. Oh, that we, as a synod might remain faithful and hold fast that which we have! Against us are the devil, the world, and our own evil flesh, as also the history of the Church, which shows that the Gospel did not continue in any one place for more than a few generations. For us are the mercy and grace of God, through which He, without our merit or worthiness, desires to retain among us the treasures of the Reformation.

It is certainly worth reading in full: 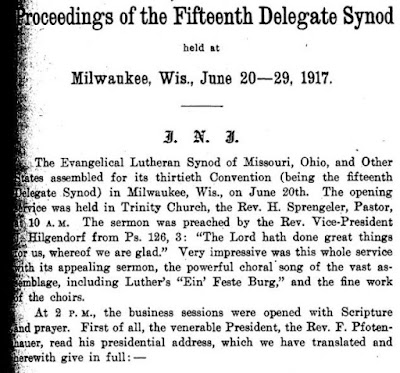 Read more »
Posted by Pastor David Ramirez at 8:42 AM No comments:

The Abiding Word: Volume I Part 1 "The Doctrine of Creation" by Prof. Gotthold Viehweg

As mentioned in the introductory post in this series, The Abiding Word was a project for the centennial celebration of the founding of the Missouri Synod. The essays were based upon convention essays and other works in German to preserve "the father's faith in the children's language."

Each essay reworks the treasures from the German speaking Missouri Synod in differing ways. Some summarize, some essays extensively quote, and others more extensively rework and synthesize previous essays. For each essay, I will try to provide some information about the author and give a brief review of the essay.

BTW, here are some some interesting links regarding the publication of The Abiding Word: Volume I:
-Review of Volume I by J. T. Mueller (scroll to page 477)
-J .T. Mueller complaining about an unfair review in the ALC's periodical (scroll to page 624)
1. The Doctrine of Creation by G. Viehweg was a 1945 convention essay of the Southern Nebraska District. 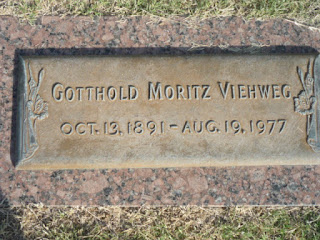 Pr. Gotthold Moritz Viehweg was a professor at Concordia College in Austin, Texas from 1928-1964. He was born in Planitz, Saxony on October 13, 1891. After coming to America, he went to Concordia College--Milwaukee and Concordia Seminary--St. Louis, graduating in 1914. He served as a pastor to congregations in Wellfleet, NE, Winfield, KS, and Arapahoe, NE. He died on August 19, 1977. (details found through CHI)

You can find some interesting correspondence of and about Viehweg and the beginning of his time at Concordia--Austin here. 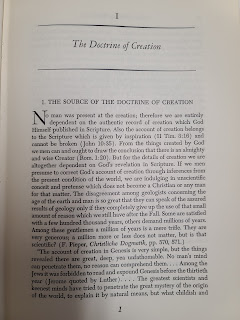 If we men presume to correct God's account of creation through inferences from the present condition of the world, we are indulging in unscientific conceit and pretense which does not become a Christian or any man for that matter. The disagreement between geologists concerning the age of the earth a man is so great that they can speak of the assured results of geology only if they completely give up the use of that small amount of reason which we still have after the Fall. Some are satisfied with a few hundred thousand years, other demand millions of years. Among these gentlemen a million of years is a mere trifle. They are very generous; a million more or less does not matter, but is that scientific?

He also relates the differing opinions of R. Pieper and some of the delegates of the Southern District concerning the firmament (which is actually a long running debate, z. B. Luther and Baier disagree on this):

Our forefathers also had quite a robust understanding of the natural knowledge of God. Concerning the birds of creation declaring the glory of God, Viehweg writes:

R. Pieper mentions especially the meadowlark and the nightingale. If a man has an ear for these voices, they sing into his heart the wisdom and goodness of his Creator, and admonish him to join them in the praises of the Creator, forgetting useless, heathenish cares and worries. 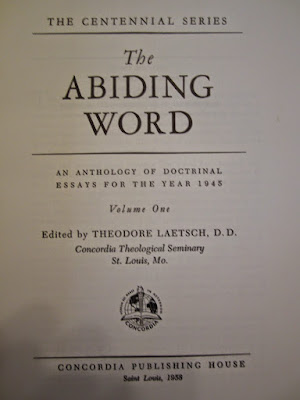 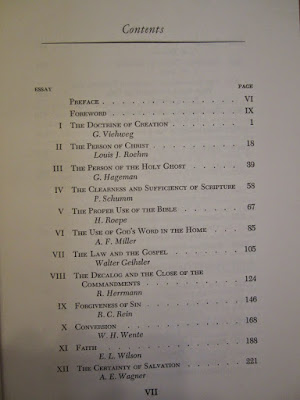 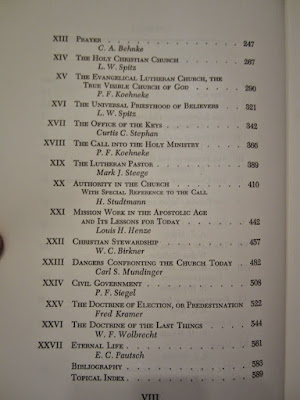 Posted by Pastor David Ramirez at 10:25 AM No comments:

The Abiding Word: Introduction and Overview 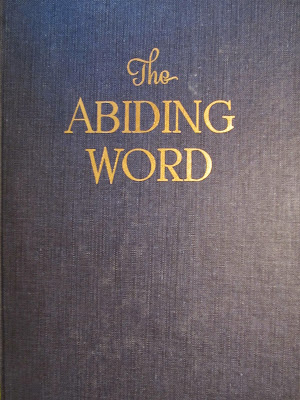 The Abiding Word is a classic collection of doctrinal essays produced in honor of the Missouri Synod's centennial in 1947 and edited by Theodore Laetsch. The original collection included the only the first two volumes, which were district convention essays from 1945 published in 1946 and 1947. The third volume was a later continuation published in 1960 that included additional convention essays from the years 1955 and 1956. This also explains why the first two volumes are usually found in hardback and the last is, unfortunately, usually found in paperback.

The essays in The Abiding Word are organized by doctrinal topic. The essays were the result of a deliberate plan to take from the best of the early convention essays (and other works) in the Missouri Synod, written in German, and rework and preserve those gems in English language essays. In the back of the first two volumes, there in an appendix that lists the works each author drew upon for his essay.
Read more »
Posted by Pastor David Ramirez at 9:49 AM No comments:

The Story of Our Church in America by Theodore Graebner 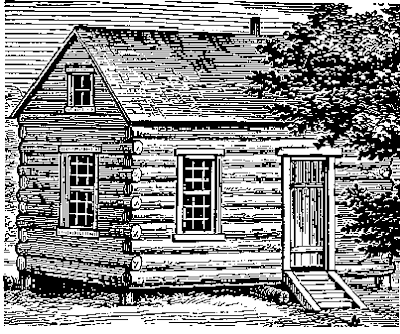 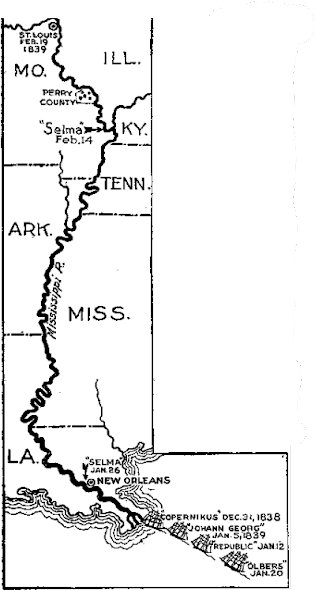 The Story of Our Church in America is a brief survey (33 pages) of the history of the Missouri Synod. While it is certainly not comprehensive, it offers a overview of the Missouri Synod's first 75 years. Of special note are the first three chapters which give a brief sketch of Lutheranism in North America before the founding of the Synod. Attention is given to the work of the Synod in education, publishing, and both home and foreign missions. The book has a wealth of pictures of the principle founders and leaders of the Synod as well as hand drawn maps that add a nice touch. Though originally published in 1922, the last chapter (of the version I have) includes an Addenda of supplementary material from 1932.

Thedore Graebner goes out of his way to thank a Mr. Bendix Taenzer of St. Louis, the artist of the maps. Graebner states that, "No such maps illustrating the history of American Lutheranism, and especially the work and development of our Synod, have ever been printed before." (The maps from the booklet are included as pictures below.) As a lover of maps myself, and a firm believer in their importance in teaching, I cannot help but echo Graebner's exhortation concerning their usefulness: "They deserve earnest study, and, once their meaning is well grasped, will deepen our realization of divine favors conferred upon our Church."

To What Intent Does God Afflict Us With Sickness? by Rev. Dr. Wilhelm Sihler

This short paper, "To What Intent Does God Afflict Us With Sickness?", is an excellent, brief resource that addresses common questions surrounding the reality of suffering and God's omnipotence. The PDF of the work is provided by 1580 Press, a site where one can find many other L-TOMs and other Lutheran works. I believe 1580 Press is run by Nathan Higgins.

Sihler was an important figure in the formation of the Missouri Synod and the establishment of the Fort Wayne Seminary. For a article on his life and work, see "Professor Wilhelm Sihler: Founding Father of Lutheranism in America and First President of Concordia Theological Seminary" by Lewis Spitz Jr.

In this brief paper, Sihler directly confronts the often troubling truth that God sends sickness to both unbelievers and believers. Straightforward assertion of the truth and childlike trust in the Word and promises of God are hallmarks of Missourian writing--especially from this era. And on this front, Sihler does not disappoint. When discussing God sending sicknesses to unbelievers, he writes: