Note: This is the second part of a review of The Lutheran Pastor by G.H. Gerberding. The first part of Mr. Porter's in-depth review can be found here, along with additional information about the book and author. 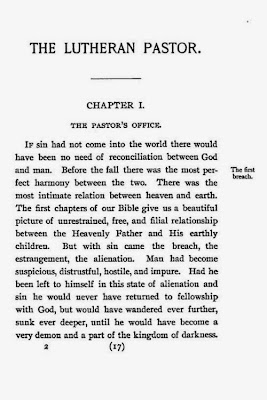 The work continues with careful examinations of the duties which properly belong to the ministerial Office. Conduct at the Altar, The Preparatory Service, a robust and thoroughly Lutheran section on Preaching, the Holy Communion, Catechizing (Confirmation), Marriage, Christian Burial, And Visitation follow. Each subject is worthily treated at length. Of particular note are the sections on the Holy Communion, Matrimony, and Visitation.

Concerning Holy Communion, Gerberding wishes to encourage fitting dispositions among Evangelical pastors. While all ministers should be cognizant of the dread seriousness of the act, they should also fully rely on the Lord’s present action as warrant for boldly administering the Sacrament. God’s promise to use the individual minister for His good purposes should override excessive scruples. Perhaps most interesting to me is his rather blasé endorsement of a receptionist position concerning Sacramental presence. Gerberding states: “Use the words of the Common Service in the distribution. Speak them deliberately, distinctly, and reverently. Do not forget that it is at the reception that the heavenly joins itself to the earthly element.” One may wonder how one could in good conscience proclaim the distribution formula while at the same time mentally withholding the reality one has just [verbally] offered to a communicant. To say that I find this position to be unconvincing would be an understatement. Further, Gerberding asserts that while the early church practiced, and the Confessions recommended, frequent reception of the Holy Communion, that the church of our time is not fit for this:


“There are those among us who argue from this beautiful custom of the Early Church for a frequent celebration of the communion among us. For an ideal Church, made up of ideal Christians, it would no doubt be meet, right, and proper. Such was the Early Church in the fervency and fervor of her first love. It was the martyr Church. In such a Church, at such a time, there would prevail such a tone of spiritual life that there would be constant readiness and fitness to come to the Lord's table. But we do not live in such a time. The tone of Frequency of the Church's life is sadly different. Amid the rush and the crush for pleasure and for gain; amid the cares of this life, the deceitfulness of riches, and the lusts of other things, there is not a constant fitness for communion. We are living on too low a plane. It is hard enough to be lifted up and keyed up every few months to a proper appreciation and a worthy reception of the heavenly feast. Special preparation and special effort are necessary. In this age of irreverence holy things easily become familiar and common.”

While I would not dispute the general dearth of Sacramental reverence among our churches, I find this characterization to push too far – especially in connection with his assertion that one need be “lifted up and keyed up” in order to be fit to receive. In my estimation this sort of language is fraught with pietistic excess. How does one get sufficiently “keyed up”? How does one know? What of Luther’s own catechetical teaching that one need only come in faith and repentance to be “fit” for reception? Gerberding does not say, but only appeals to a highly romantic notion of the primitive church as an age which provides the index of worthy reception. However unhelpful these contentions may be, it was good to read his strong rejection of both individual cups and undue hygienic concern as contrary to the nature of the Sacrament itself. Indeed, the subject is only mentioned in a footnote, which seems to suggest that such practices were still in the minority and therefore did not require too much attention at the time of writing.

Regarding Marriage, Gerberding has sound advice to offer, including the now somewhat countercultural suggestion that pastors ought to actively discourage their parishioners (especially women) from joining in matrimony with those of another Christian confession. Regarding Visitation, he provides a lengthy and well cited description of the pastor as Seelsorger and considers several varieties of visitation. He lists ten categories with which to classify those in need of visitation: those who have been “impressed” or made “serious” (by a sermon), new members, the tempted, the doubting, those vexed by false teachers, special heresies (this section is devoted to contemporary heresies like Christian Science and “Dowieism”), the troubled/sorrowing, the “diseased of mind” (turn of the century psychological study makes an entrance here), those at enmity with one another, and prisoners.

It is not an exaggeration to say that Gerberding finds visitation to be the most important regular pastoral duty, beside the Sunday Service itself. It provides knowledge of and affinity for his flock, as it also delivers the Word in the circumstances of daily vocation. The same high pastoral culture described above is meant to inform and color the daily visitation. A pastor is bidden to cultivate a sensitivity to the varied circumstances, vocations, and concerns of a flock which should be intimately connected to klugheit and commonsense.

Gerberding views sick visitation as a category which requires a treatment of its own. He emphasizes that sickness presents an opportunity for the pastor, and may bring much good to the individual convalescent’s soul. God may have actively sent the sickness apart from discernable cause, or passively allowed the sickness as the result of determinedly poor living, but in either case providentially orders it for the good of the sinner. Such determinations may be difficult to make, but the larger point is that however the sickness arrives, it is never apart from God’s ordering and benevolent will. Some consideration of proper preparation for a sick visit is accompanied by a catena of citations from the practical theologians. Some interesting advice regarding professional courtesy (regarding doctors) and in assisting in the writing of wills closes the section.

Gerberding then describes how a pastor should spend his vacation time. The generalities offered here are fine, if somewhat more attuned to the early 20th century.

On the whole, there are two main foci of Gerberding’s work: providing a correct understanding of the Office of ministry in terms of its essence, form and function, and providing a vision of high pastoral culture. More than this, it is an appeal and an exhortation. Gerberding commends his understanding of the ministry and its proper discharge to his fellow pastors. Despite a few areas of contention (and, error too, I submit), it is an edifying work which commends itself by its global concern and its apparent passion for the Ministry of the Gospel.

I hesitated between five and six because, while I thought that the subjects covered were good exercise in the fundamentals, I can’t say that there is anything particular challenging or stimulating here in terms of theology and doctrine. In the few places where he is courting controversy, the issues raised seem fairly context-bound (as in his curious evaluation of the theology of office as it relates to Deacons/Deaconesses, due in large part to the Occidental success of the Inner Mission). We have difficulties with knowing what, if anything, to do with Deacons and Deaconesses, but the issue does not seem to be one of the more pressing ones for Lutheranism overall. Though, perhaps that isn’t true in regard to Article XIV and some forms of the Lutheran Diaconate. In other instances, it isn’t so much that Gerberding is provocative, so much as he is simply in error. Ultimately, I decided on a six because of his presentation of an ideal for shaping pastoral culture. This was, for me, the great value of the book. 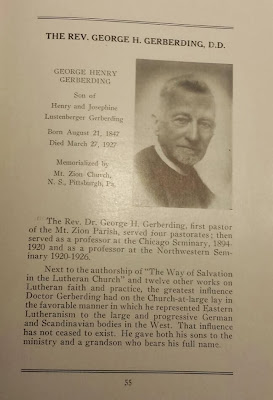 Thank you again to Mr. Porter for his thorough and stimulating review!
Posted by Pastor David Ramirez at 1:06 PM