The Gift of Communion (Communion and Mass) by Carl F. Wisløff 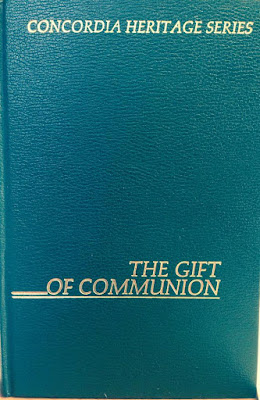 Note: Thank you very much to Rev. Benjamin D. Hertel of Saint Luke Lutheran Church in Rensselaer, IN for giving us a review of Carl F. Wisløff's The Gift of Communion (Nattverd og messe/Communion and Mass). While not strictly an L-TOM, nor written by an American Lutheran, it was an influential work, translated by Joseph M. Shaw and published by Augsburg Publishing House in 1964. It is included in the Concordia Heritage Series (the dark green hardback series). You can buy it on Amazon or find a copy through Bookfinder.

Wisløff (1908-2004) was a Norwegian theologian known for his opposition to liberal theology. He was also influenced by Norwegian Pietism, especially in regards to lay preaching and evangelistic endeavors. His most influential book with the Norwegian public was Jeg vet på hvem jeg tror (I Know in Whom I Believe).


A short, but thick book, Carl Wisløff’s work is not something I would recommend to the layman or the arm-chair theologian. The concepts are easy enough, but the way Wisløff presents his points can be a bit congested and repetitious at times.

Wisløff seems to assume a lot from his reader and that he is a trained pastor. Knowledge of certain terms, events, and theology are sometimes not explained. Nevertheless, Wisløff has, in this short book, amassed a large amount of Luther quotes. Though it reads like a text-book, for this we should be grateful.

Wisløff's main claim is that not enough attention has been paid to Luther speaking against the “sacrifice of the Mass”. He says that Lutherans would rather speak against the Reformed or the enthusiasts and probably find Luther lacking on the subject.


In the first seven chapters, Wisløff aims at exactly that point. For the Lutheran to converse with Rome on the Mass, this book makes a great resource. Although the proofs Wisløff uses, from Luther, are already familiar, it is good to hear them in the context of what Luther's Roman opponents were actually saying and teaching.

Chapter 1 makes the primary argument, already stated above. Chapter 2 focuses on Luther switching the language of describing the Mass from sacrifice (work of the people) to sacrament. “…God does not demand our gifts but our very selves…” (p.11). Here Luther is heard to be undercutting the idea of the piety of self-sacrifice of the people, adding to the priest’s sacrifice.

Chapter 3 aims at showing that, for Luther, the “substance” of the Mass is found in the Verba alone. The “accidents” are anything outside of Christ’s words (p.24). This leads to chapter 4 in which we hear about the covenant or testament, entrusted in the Mass. The Mass is not a sacrament of work, but a testament to the incarnation and atonement of Christ (p.33), which is nothing but the Gospel and God’s promise of salvation.

By this point, we see Wisløff's main motif: that the Mass must be explained by the Words of Institution alone. Chapter 5 brings up, indirectly, Original Sin. This is probably, in my opinion, the largest error Rome has in her Christology, for she wishes to retain at least the ability to cooperate with grace, for salvation.

In this respect, Luther doe not mischaracterize Rome in saying that they believe the Mass to be works righteousness. Against the opus operatum, Luther demands faith, for how can anyone receive anything from God if he does not believe? Luther demands faith, not cooperation, because there is a break, not continuity, between the natural and supernatural (p.51).

Chapter 6 is especially enlightening for it pits the Verba against the Canon Missæ. Wisløff shows that Luther understands the Verba to be the key. Especially when talking about sacrifice, Jesus never offers the Passover meal to the Father, for our example. There just is “…nothing in the texts which says that Christ took the bread and ‘lifted it up before God.’” (p.63).

I also want to include this great quote Wisløff has from Thomas Aquinas against the Mass as sacrifice: “No cultic meal can be held with the sacrifice for sin, because to partake of the sacrificial animal which bore the sin would be to imply that one took back some of the sin upon himself” (p.65).

Thus, chapter 7 concludes with undermining the priest’s ability to even offer a right sacrifice, if the Mass was a sacrifice. There is only one sacrifice for the royal priesthood. There is no second sacrifice that allows for a special character to be given to priests; no sacerdotium visible et externum in the new covenant. Finally, there is only one task for the priesthood of the new covenant, which is to preach the Gospel.

Part three of this work finds Wisloff commenting on related issues of controversy, which is helpful, but not against the Mass as sacrifice. He discusses the liturgical consequences of the Lutheran thought and understanding in the final chapter.

Wisloff brings together a lot of Luther on the Mass and is very helpful to the pastor when speaking to a Roman Catholic about the Mass. Wisloff is thorough enough to grasp both Luther and his opponent’s position, genuinely.

If your current struggle or interest lies in the Mass as sacrifice and Luther against it, this book is very helpful when added to your bibliography.

While not desperately needed for day to day conversation, it is a valuable resource for discussions or concerns related to Rome's teaching on the Mass/Lord's Supper. If a layman is intensely interested in the subject, then it is worth getting, but otherwise, it is a more pastor-friendly book.


Thank you again to Pr. Hertel for his helpful review of a book that is probably little known to many!
Posted by Pastor David Ramirez at 1:48 PM