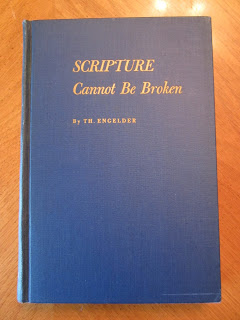 Scripture Cannot Be Broken (CPH 1944, 496 pages) by Theodore Engelder is a staunch defense of verbal inspiration and inerrancy. Engelder was also the main translator of Franz Pieper's Christian Dogmatics. He taught, especially Symbolics and Dogmatics, at both Springfield and then St. Louis. During his time at St. Louis, he published a series of articles in Concordia Theological Monthly, "Verbal Inspiration-A Stumbling-Block to the Jews and Foolishness to the Greeks," April '41 to December '42. These were compiled and edited into this volume due to encouragement from many within and without the Missouri Synod. It was a timely book since many Lutherans were wrestling with questions about verbal inspiration and the historical-critical method.

Strangely, the table of contents is found in the rear of the book alongside general and biblical indices. The longest section, almost half the book, is devoted to the answering of the question: "Does the Bible Contain Errors?" Engelder shows mastery of his opponents lines of argumentation and theological framework. He deals with the broad issue in the abstract or general sense, as well as confronting specific, frequently raised "errors."  The remaining major chapters are:

Throughout the work, Engelder displays a gentlemanly and charitable demeanor. However, he does not pander or apologize to those who charge the Bible with falsehood, but rather exemplifies the sense of scandal and disgust the Christian should properly feel against such charges.

This volume stands well alongside other classic defenses of orthodox teaching on the nature and interpretation of the Holy Scriptures from that era such as P.E. Kretzmann's The Foundations Must Stand and W. Arndt's Bible Difficulties or here, or the updated edition from CPH.


Need to Get Level: 8/10
It is easy to find and cheap to buy. If you are a pastor, my question would be: "Why wouldn't you have this on your shelf?" At times it becomes technical and assumes a seminary education. I would therefore suggest Arndt's book (mentioned above) for the interested layman. But I certainly would not dissuade the ambitious layman who wishes to plow into Engelder's profitable work!

To those who think that the era of fighting over inerrancy or scriptural interpretation is over and that we have moved on, the time to relieve yourself of this uninformed opinion was yesterday. The battle over verbal inspiration does not make headlines or waves anymore, not because it is unimportant or fading away, but rather because it has largely been lost. Like feminism, denial of the truthfulness of the Scriptures is the default position of Americans today--especially the younger generations. Your parishioners live in a culture that denies the Bible. They breath in those presuppositions all day long. Engelder's work in this book is helpful, clear, and comprehensive on that thing which Satan has always rained down his blows upon--the Word of God. 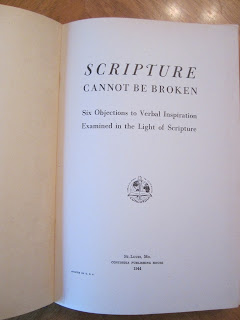